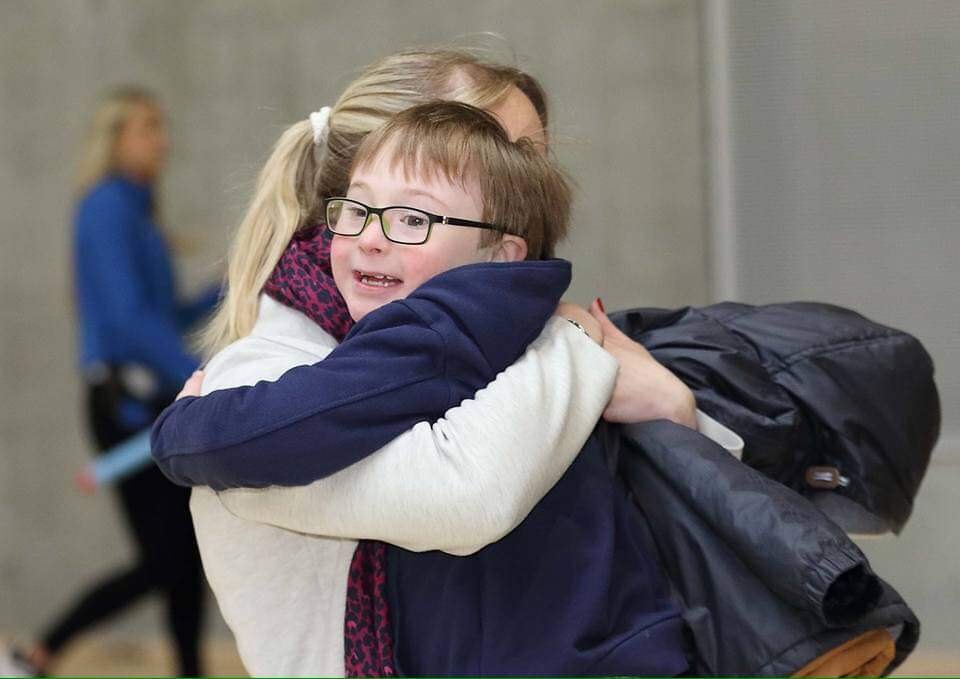 Genuinely I think that for us as a family Lámh has been one of the best things that we’ve done.

Ceire Rochford is mother to two beautiful boys, Fionn who is six and Odhran who is four. Ceire shares Fionn’s story with us: “Fionn was born in February 2012 and diagnosed with Down Syndrome a number of days after birth. From a very early age, Fionn would try to communicate with anyone that held him: looking deeply into their eyes, following their gaze, making sounds and reaching out. It was obvious that there was lots of personality in there that needed to find a way to burst forth. And that it did… thanks to Lámh.

“Odhran has learned Lámh by osmosis and is able to use Lámh freely with his brother and others with communication difficulty. Lámh has been a game changer for this family.”

We started Lámh when Fionn was about a year old. We stuck with it and after about six to nine months we got our first sign back. I’ll never forget when he did it. In my bedroom beside the radiator and I think I screamed at my husband “Crack open the champagne!” Such a brilliant moment. The first sort of glimpse of what could happen, what the potential was. And it was an absolutely magical moment for us as a family and I think I nearly killed him with hugs.

And then it just ballooned. It was absolutely incredible. Once the first sign came, suddenly there was a snowball effect and we were up to the 50th or 60th sign.

But the benefits of Lámh for Fionn - for us, but particularly for Fionn - the most important one is that it gave him a voice so it allowed him to communicate with us. And that’s really, really important.

It also allowed confidence to develop. Can you imagine if you were trying to comunicate with somebody and it’s just not getting through, it’s just not getting across. Confidence is impacted by that. Human nature being what it is, we blame ourselves if communication goes wrong or you can’t get your point across. You automatically think “What am I doing wrong here that people aren’t getting it?” So you lose confidence.

So using Lámh we were able to support Fionn to find his own voice. And in doing this, helped to build his confidence. Now he has no problem with confidence. I think we went a little bit too far!

It is so important that he can function within society, that he can communicate with the people around him. He can be understood, not by everybody: if somebody doesn’t understand Lámh there’s a breakdown in communication. But for those that know Lámh – his peers, his teachers, his SNA, his family – the core people involved in his communication world now know Lámh so we’re all able to communicate. And how that must absolutely build you up from a place where nobody understands what you’re trying to say. It must be absolutely brilliant.

Respected – his personality was able to shine through. So we could actually see “Well, here’s the personality of this kid. He’s absolutely hilarious.” Well, I’m biased but he is hilarious. Pride, friendship, love, they are three massive things.

Our journey with Fionn

Well our journey did not start off well, because when our speech therapist suggested Lámh to me I hit the roof. I was really annoyed over it. I was really angry. It created a huge amount of anxiety for me. Your child is so young. In the first year you’re going from one appointment to another. And every appointment you go into, you’re waiting for someone else to tell you something else isn’t working , needs help or... so you’re in panic mode for that first year, every time you meet a professional.

Understanding as well – I was stupidly of the belief that Fionn understood everything that I said, absolutely everything. It becomes apparant when you get into different concepts or when your child is at school that actually many of the things you thought your child understood, they actually don’t. And that’s where Lámh comes back in again and is really, really useful.

And I’m finding that now. He started in Junior Infants in September and now I’m finding that Lámh is brilliant to help him understand different concepts. And it’s really, really working. Even though he’s verbal now it really does help.

With expression comes personality. If you can allow someone to express themselves, you can allow the personality to burst out. That wittiness, that sarcasm, being funny, throwing in a quip. Sometimes I just sit there and think “My God! How did he come up with that!” Absolutely priceless stuff. I think Lámh gave him the confidence to build and express that personality.

In preschool and Montessori – my second son Odhran, he goes to the same Montessori Fionn went to – when Fionn was there the teachers did Lámh courses and one went on to do the QQI Level 5. Very, very enthusiastic about it. And last year another little girl with Down Syndrome started and it’s been brilliant because Odhran does Lámh. So they sign over and back to each other. Fantastic!

As I said I thought he understood everything, he clearly didn’t. Now he wants to be a Lámh Tutor. That is not a joke. He wants to be a Lámh Tutor and when I’m teaching on a Lámh course and I’m practising my signs, he’s up on the couch beside me and testing me. he came into the living room last week and I was practising – and I said “What’s the sign for...” whatever it was and immediately he did the sign. So he absolutely loves it and is very adament that he’s going to teach Lámh.

Lámh - a huge bag of tools

Genuinely I think that for us as a family Lámh has been one of the best things that we’ve done. And we’ve done a lot because you’re bombarded with lots of things that you feel a responsibility to do and try to get involved in everything. But actually I think Lámh was probably the best thing we could have done as a family. Not just for Fionn but for all of us.

When I look now and see how far we’ve come at six years of age, holding court at dinner, fully verbal – not always easy to understand – but fully verbal. If I can’t understand something he’s saying, I’ll still say “Come on Fionn do the sign. I don’t understand. You’ve got to do the sign.” And he’ll do the sign and then we’re back on track again. And there’s no frustration and that’s been a massive element.

We’ve had very few behavioural issues with Fionn. I think that if he wasn’t able to communicate his needs, or what he did or didn’t want to do, we could have had a lot more issues with regard to behaviour. And certainly that’s something that we have been able to manage really, really well.

And I’d say that to all new mothers that are thinking about doing Lámh – ok even if you can’t see a value in it now when you can pick your child up and strap him into a buggy. There is a value in it when your child is six, sitting on the ground in the supermarket and you want to get him home – to be able to communicate your expectation and know that it’s understood. And that’s given Fionn a huge bag of tools that he can pull on when he’s trying to communicate.

Your shopping cart is empty.